The yearly Mid-Autumn Harvest Festival celebration in Asia is a time for gifting, and an especially important festival in China. While other luxury brands presented edible gestures for the celebration, Hermès, the well-known French fashion house elected to create a unique package containing two luxurious rainbow sticks.

Originating in Japan, rainbow sticks can be spun between the palms of the hands and this motion creates a rainbow-coloured bubble effect suspended above the hands due to the metallic strands.

The Stage worked closely alongside Hermès and its partner, Plug Design to create this exclusive gift set resulting in a bespoke offering which was manufactured with a striking resemblance to the popular paper lanterns used during the Mid-Autumn Festival in 2019. 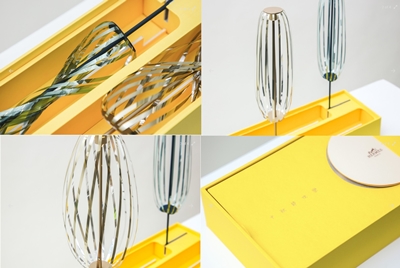 Let’s Talk About Your Project

Let’s Talk About Your Idea